Thomas Cawood (38), Plant and Production Operational Manager at Bolton Footwear was one of the participants in the 6th BUCO Origin of Trails, which was held in Stellenbosch over the past weekend (24 and 25 November). Prior to the event, he invited riders to support the Pay it forward campaign, initiated by Olympic International, a South African athletic footwear brand from Bolton footwear, and a sponsor of the Origin of Trails event.

Through this campaign they invited participants to donate any old sports equipment, clothing and footwear at the Olympic International bins provided at the race. “Everything collected will be distributed to needy beneficiaries,” said Cawood, who rode in a pair of Olympic International Traction shoes that he purchased three years ago. “I’m looking at replacing my pair simply for the new potential styling that I fancy. The shoes are extremely comfortable and perform better than expected.” At the end of a long event your entire body hurts and you’re tired, “yet I’ve never had any issues with my feet due to the relaxed fit of the shoes,” he says. 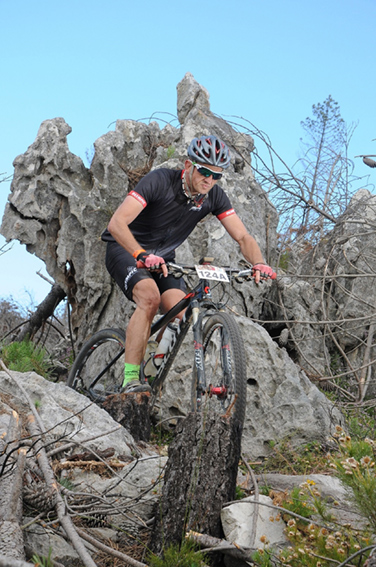 An avid mountainbiker, who recently completed the Wines2Whales, Sani2C, and extreme events like the Cederberg100Miler and Attakwas, Cawood (above) this year participated in the Origin of Trails for the third time.

Used cycling and trail running shoes that were dropped off at the Olympic International bins are being distributed to needy children and adult charity organisations such as Aitsa, an aftercare centre in the heart of Kylemore in the Dwarsriver valley looking after 180 children, Songo.info, and other organisations, to spread some festive cheer.

This year the Origin Of Trails Trail Run was added to the two-day mountainbiking event, with a 50km route through the scenic Stellenbosch mountain ranges.